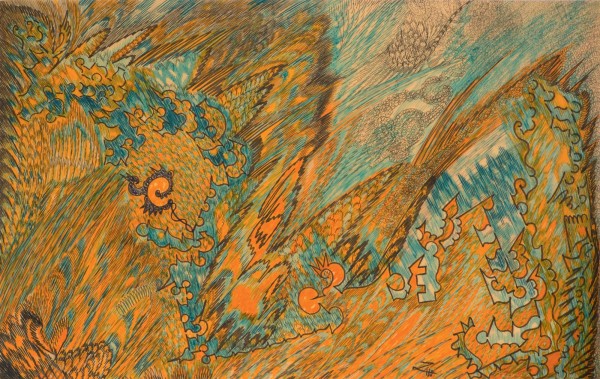 Married in 1941 to a Martinican, Henriette Zephir left with her husband to settle in Martinique, but they were stopped in Casablanca and her husband mobilized. After the war, they finally moved to Martinique but Henriette Zephir could not adapt to the life on the island, and returned to Nice in 1956. On May 1, 1961, her “guide” appeared for the first time. Since then, she abandoned herself to what she called “the occult.” The demands of the guide were expressed in various ways: long sessions of drawing that would end only once whole sheet was filled; long sessions of prostration, during which she remained lying on the ground or kneeling. She saw herself as an instrument of the forces from the beyond and did not consider her production as art. Her works are abstract compositions with strong colors combining curves, points and other geometric shapes.