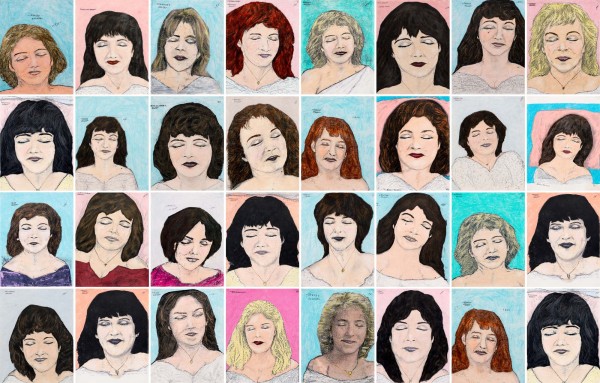 After graduating high school and completing his military service with the Marines, Paul Humphrey was employed in roadwork for a number of years. In 1971, he moved to Brattleboro, Vermont, and became a taxi driver and then a house painter. At age fifty-seven, he suffered a serious heart attack that forced him to stop working. In a precarious financial and social situation, he survived on a small pension and by collecting bottles and cans for resale. It was at this time that he began to draw. He said that the first inspiration for his artworks was his daughter’s class photographs. Then, he clipped pictures of film stars out of newspapers and models from mail-order catalogs—always women and always head shots—and had them photocopied. He fully colored the entire surface of the sheet of paper and systematically closed the eyes of his subjects, transforming them into contemplative “sleeping beauties.” At his funeral, it was discovered that Humphrey had never married or had a child. He had invented a gallery of portraits of a false family.