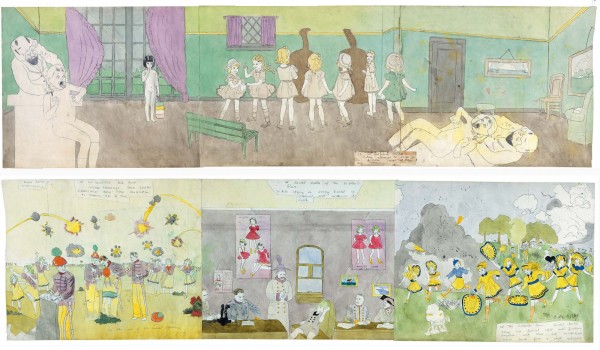 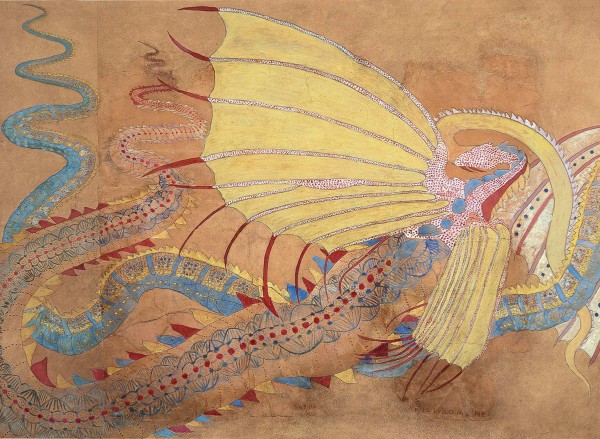 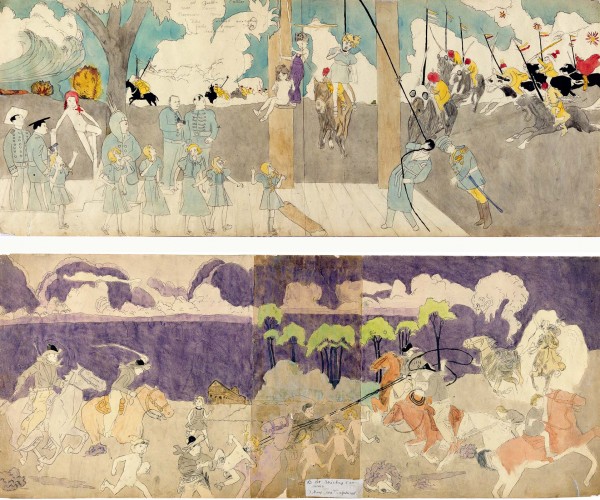 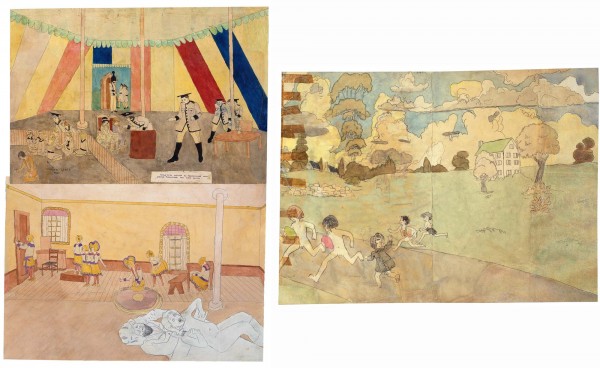 Henry Darger was only four years old when his mother died giving birth to his sister, who was soon given up for adoption. When his father became too sick to care for his eight-year-old son, he placed young Henry in an orphanage. In 1904, he was transferred to an institution for children with learning disabilities, from which he escaped in late adolescence. Returning to Chicago, Darger worked in various Catholic hospitals—usually as a janitor—during the day and, at night, he secretly devoted himself to writing a fifteen-thousand-page fictional saga (it filled fourteen volumes): The Story of A the Vivian Girls, in What Is Known as the Realms of the Unreal, of the R Glandeco-Angelinian War Storm, Caused by the Child Slave Rebellion. Written between 1910 and 1939, the story paralleled the events of the American Civil War. The action takes place on a planet where the Christian kingdom of Abbieannia—led by seven princesses, the Vivian Girls—is allied with other countries in a war against the atheist state of Glandelinia, which has occupied the nation of Calverinia and enslaved its children. In 1939, Darger began a new work, Further Adventures in Chicago: Crazy House, which included more than eight thousand pages devoted to the Vivian Girls and their brother Penrod in a plot involving murders in a haunted house. Other long texts followed, including an autobiography and a weather journal, bringing Darger’s writings to more than thirty thousand pages. Darger’s graphic work must be seen as an extension—not an illustration—of his literary work, which was initiated earlier. There are two groupings: the first involves a hundred studies and sketches (portraits of generals), maps, and collages (famous children, fictional characters); the second is composed of approximately two hundred drawings, originally bound in three albums, which were dismantled and dispersed after his death. These double-page watercolor panoramas portray scenes linked mainly to the adventures of the Vivian Girls. Books of fiction, illustrated publications on the American Civil War, magazines, newspapers, as well as religious, comic, and children coloring books served as visual and documentary references in the production of Darger’s body of work. Characters inspired from these sources populated his compositions—often series of identical figures reproduced and multiplied by the use of carbon paper. He traced the silhouettes and had them resized photographically in a lab to fit the dimensions of the particular work.