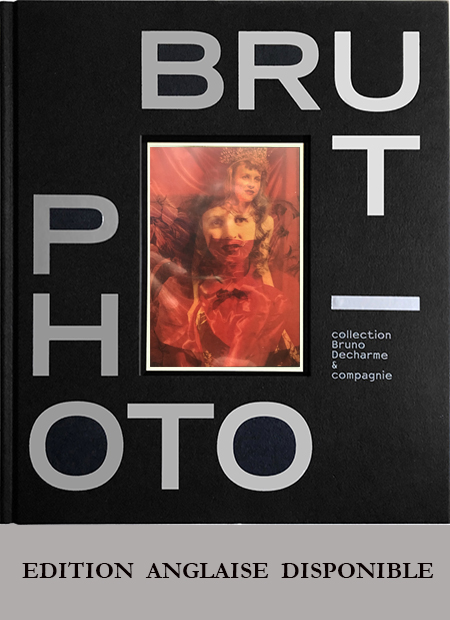 This catalogue has been published by abcd, American Folk Art Museum in New York and Flammarion.

Can we consider “brut photography” a category of art brut, according to the definition of the concept formulated by Jean Dubuffet at the end of Word War II? This group would then include photographs, prints, photo- montages, and photo collages produced by self- taught—and often marginal—creators who are outside of conventional art circles, in mental institutions, or in solitude in the city or the countryside. The accompanying exhibition brings to light a rich corpus that is disturbing and often enigmatic. The intention is to offer a first glimpse at this artistic universe that has received little attention up to now.

Photo | Brut presents more than five hundred works from the collection assembled by Bruno Decharme, enhanced by works from museums and private collectors chosen for their complementarity. It includes the work of fifty-three artists whose creation testifies to the links between art brut and photography. Some of them are well-known; others are real discoveries. These creators of a particular kind show us the extraordinary inventiveness of their productions, which overturn the categories and classifications usually adopted by the history of art. This international exhibition, the first on the subject, and the book that accompanies it testify to a little explored field of the art brut territory and open the way to innovative practices in the field of photography, thus contributing to renewing the gaze focused on this medium.

Providing glimpses of private and intimate scenes, some of the photographs, montages, and collages explore sexuality. These works flirt with perversion or play on the image of the seductive or threatening femme fatale or that of the Madonna, the saint, or the innocent little girl. Some series clearly manifest the artist’s pleasure as he documents repeatedly—obsessively—every gesture of the object of his desire.

Some creators, who are radically broken away from society, try to appropriate the world or master the society from which they have been excluded. To do this, they sample miscellaneous bits of the outside world and integrate them into their private, personal universes, transforming them into keystones of their own stories. As isolated observers, they provide surprisingly perceptive commentaries on current events.

PERFORMING, OR ANOTHER I

Through stagings, disguises, and role play, these artists invent new identities for themselves. Engaged in actions that might seem parodic, they explore gender fluidity and the mechanisms of representation. The idea of performance poses the questions of audience, exchange, and duration. Whether they are public or not, these works, which blur the borders between art and life, do not seem to have been done to establish a relationship with the outside world or an eventual spectator.

Through various sorts of rituals, some creators set out to bring to light what I T the human eye cannot see, to record apparitions and visions, to master what reality conceals, or to conjure up terrifying certainties and threats. Sometimes, using scientific or magical explanations, they try to make sense  of what evades our view, to organize or contain mysterious devastating forces, and to make order of what threatens to become chaotic.

322 pages
Format 28×24 cm
600 reproductions
Interview with the collector Bruno Decharme by Paula Aisemberg
Essay by Sam Stourdzé
Essay by Michel Thévoz
1 essai for each of the 4 themes:

Private Affaires by Brian Wallis
Reformatting the World by Camille Paulhan
Performing, or another I by Valérie Rousseau
Conjuring the Real: Spirits, Fluids and Threatening Forces by Barbara Safarova