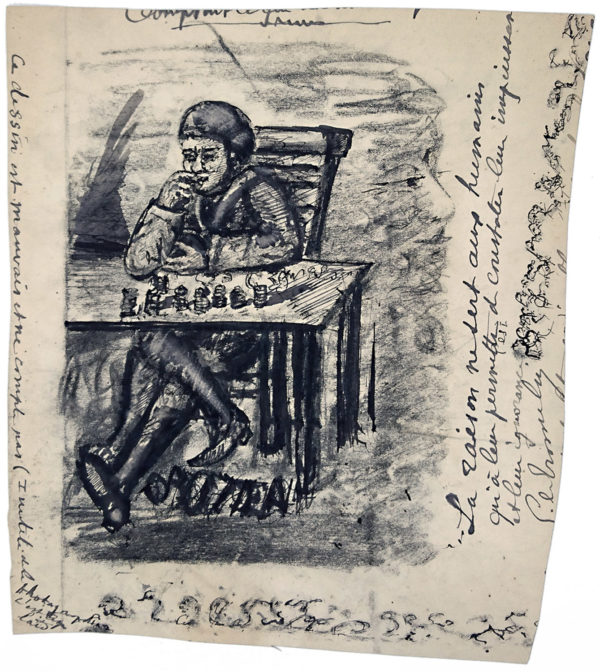 In 1903, the fifty-three-year old Count de Tromelin, learned mathematician, decided to devote himself entirely to spiritualism. He began creating drawings that he qualified as “semi-median,” at night, reported Dr. Marie, on a table that he kept placed near his bed for calculations he made in case of insomnia. Deprived of light, he once made, in a state of semi-sleep, a stain-like image in which, the next day, he tried to find the notes he had previously taken. When he start to rub the image with a dry pencil, he discovered lines which revealed, to his amazement, a flurry of satanic signs: “What we see coming out of the paper is so astonishing that we can no longer leave this occupation, once we have found the right method and began to see […] but I admit that in order to create something pretty, you have to be a bit of an artist. Indeed, there are plenty of figures and characters coming out and it’s up to you to choose which ones suit you best. With my great habit, I immediately see what a non-initiate does not see…” In 1903, he convinced himself that his imperious desire to draw was governed by supernatural forces and that he could not be the true author of his drawings: “[…] One day, at the bottom of a drawing that I had just completed, I read quite clearly ‘Pact between such spirit and de Tromelin, by which the latter pledges to remain faithful to him, etc.’; I was astonished, and as I was asked to sign, I did it as a joke, and also because by signing my drawing, I wanted to sign this pact, and I said so aloud; nevertheless, I signed with a laugh.” From that moment onwards, he devoted himself entirely to spiritualism and other occult experiences, which he recounted in 1907 in a self-published book “Critique des mystères de l’univers” [Criticism of the Mysteries of the Universe]. The reader learns that several kinds of spirits accompany him — constructive, giant, aerial, or loving. Not all of them exercice positive influence on him; some persecute him to the point of trying to push him to suicide. A temptation which he resisted as he died peacefully in 1920.
The initial drawings — the two drawings in the abcd collection date from 1903 — were made automatically, without any control, revealing hidden specters. Later on Tromelin began drawing the occult world in a perfectly mastered style which no longer fit in with the randomness of automatism but would be more in line with its traditional representations.