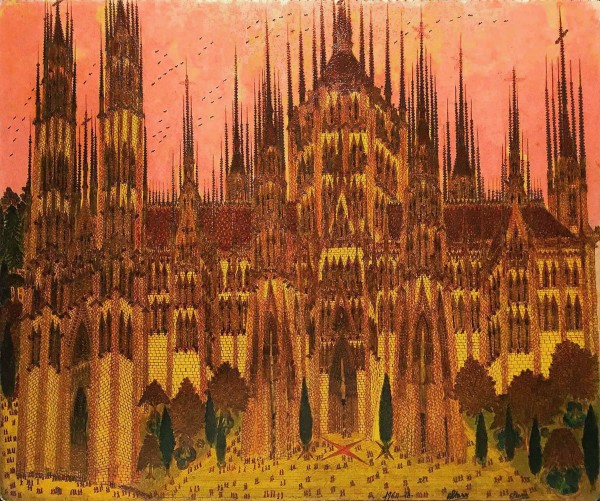 Marcel Storr had a difficult childhood. After havig been abandoned, he was placed in farms where he was abused, then left to the nuns in Alsace. He then worked various odd jobs before marrying in 1964 and found a job with the City of Paris as a mender in the Bois de Boulogne. He would gradually become deaf and at the same time developed psychological disorders that led him to spend short periods at Evrard City Hospital in 1974. He died of cancer in November 1976.

Marcel Storr began his work in the 1930s by drawing small-format churches, in a rather naive style. In the 1960’s his style became more pronounced, with the representation of cathedrals-palaces evoking the Basilica of the Sacred Heart or the Kremlin, St. Sophia or the Austrian Baroque.

From the 1970s his inspiration has become more extravagant with Neo Babylonian-like buildings that are reminiscent of the Ideal Palais of facteur Cheval or neo-Gothic skyscrapers.

In the late 1960s, Storr’s wife, primary school custodian, benefited from the absence of her husband to invite a couple of collectors, Liliane and Bertrand Kempf, showing them  drawings hidden until then under the oilcloth of the kitchen table. Fascinated, the couple followed Storr’s work and at his death was entirely entrusted with its future destiny. First, respecting the gardener’s will not to show his work and even less to sell, the Kempf kept it at home, however finally decided to exhibit it and put on the market to promote its value.