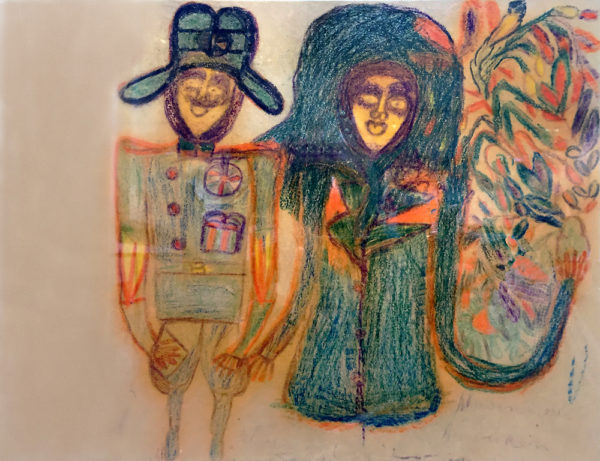 Born in a small country village, Jean Radovic lost his father very young;  he was assassinated during a quarrel between neighbors. Radovic went to school for a short time and became a shepherd. At the age of fifteen he had to cut down a tree called in popular language “the grape of the witches”; this harmless event became a source of deep anguish as he had the impression of being constantly pursued by witches. At twenty-four he entered the army. During the war he was taken prisoner by the Italians but managed to escape by crossing the Swiss border. Because of his aggressive behavior he was hospitalized  in a psychiatric hospital in Lausanne in 1944; diagnosed psychotic, he was treated by Pr Alfred Bader. His behavior only worsened, he repeatedly attempted to rape young girls and attacked caregivers and other patients. Yet it was in this context of extreme tension that he found the strength to produce his graphic work. Most of his drawings feature a couple representing a soldier and a woman. Repatriated to Serbia in 1948 we have no more information.