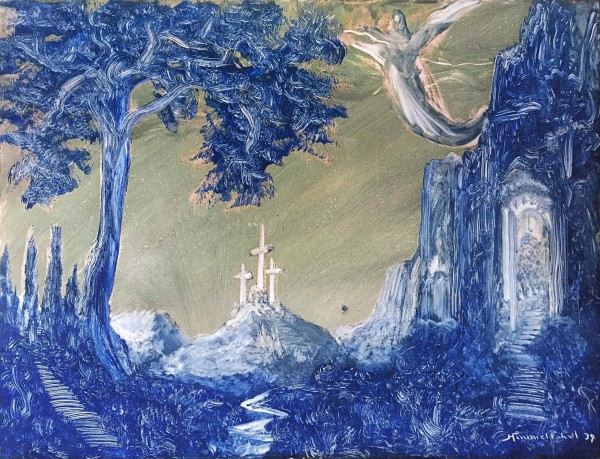 Heinrich Nüsslein  grew up in a family of German petty bourgeoisie. After training as a typesetter and bookbinder he entered the National School of Arts in Nuremberg, but he stayed only for a year because of a very poor eyesight. He worked as  a photographer for some time and in 1913 started to work in an antique shop in Nuremberg. In the twenties he began his own artistic work, influenced by spiritualism and esoteric sciences. His work is of religious and mythological inspiration; he described himself as “a psychic painter and metaphysical writer.” His style followed the path dictated by his trance: “I do not paint, but it paints,” he said. He executed his works most often with eyes closed or in darkness, in a very short time, from one to fifteen minutes, exceptional paintings with a brush that he wiped with a cloth.

Exhibited in London and the United States, he acquired a certain notoriety and created a considerable production; from about 20,000 works most have disappeared, confiscated and destroyed during the Nazi period; today there remain only a few hundred.