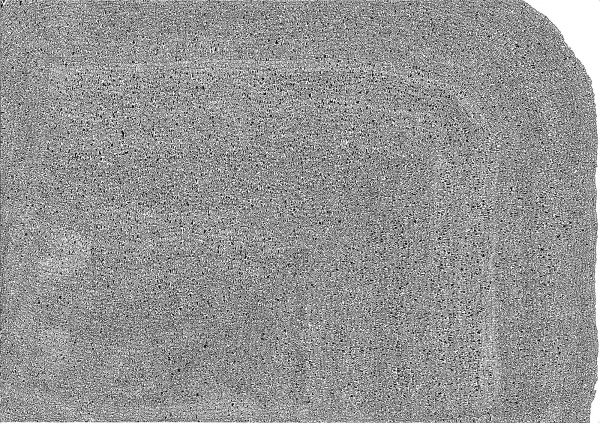 Ever since Carlo Keshishian started drawing comic books when he was ten years old, he has based his works on text. His comic book phase was followed by automatic drawings that covered his school work, leaving place for spontaneity and free association of images. His diaries—drawings comprised solely of text—developed slowly, from his mid teens onwards. His initial diaries contain random letters with a few words; the most recent ones are composed of actual sentences. The first of his diary drawings, created in 2010, is made up of 3,954 words. Keshishian diaries are filled with personal reflections, contemplations of the present and future, and an introspective search for existential meaning through the process of writing that might extend over several drawings. He is reluctant to share their meaning; hence, the diaries appear coded in minuscule text. Keshishian likes to work several hours a day. A sentence will generally take Keshishian five minutes or less to draw. Originally, he did not pre-write the contents of his drawings, but now he types what he intends to draw. His rhythm can be disrupted when he is dealing with a personal traumatic event, forcing him to resume his art at a more opportune moment.  His drawings vary in format and generally decrease in scale with time. They seem to follow a uniform structure , despite different contents and flow. Music greatly influences Keshishian’s creative process. He views music as another “archive of the self.” He used to create music himself, looking for sounds that he could not identify. He was particularly fond of recordings in which the sound was created by instruments hand-built by musicians. Around 2007, he stopped creating music and began learning about and collecting spiritual, improvisational, and modal jazz music from the 1960s and 80s. Today, he animates a monthly two-hour show, based on the music from his personal vinyl collection.