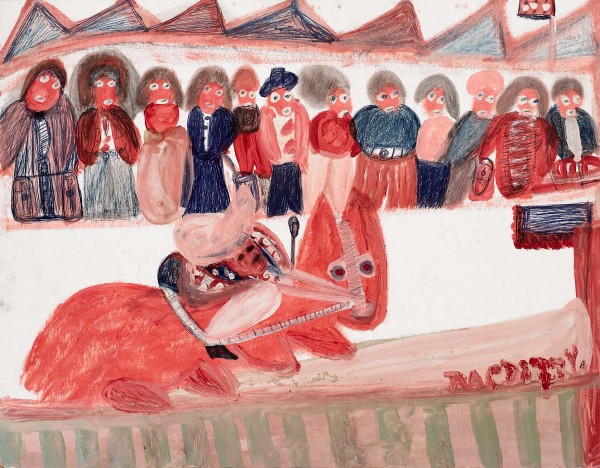 Ras Dizzy is the producer of remarkable paintings, belonging to the so-called “Intuitive” artists of Jamaica, a group of self-taught artists whose work began to attract media attention and experts in the late 1970s. We can only speculate about many details of Ras Dizzy’s life. Indeed, fantastic stories and fabrications have earned him the nickname “Dizzy”, “Ras” being an honorific title of the Rastafarian movement. Ras Dizzy claimed to have traveled to Africa and China, mounted on horseback with Hollywood cowboys, and to have fought against Cassius Clay.

In the late 1960s, he lived on the margin of the art scene in the capital, traveling through Jamaica selling or exchanging drawings for food and distributing copies of his poems. At the University of the West Indies, radical intellectuals published in their weekly his fantastic poetic and socio-political comments. The paintings and sculptures of the “Intuitive” Jamaican artists are mostly scenes of rural and urban life, sometimes referring to the Bible or to African spirituality.