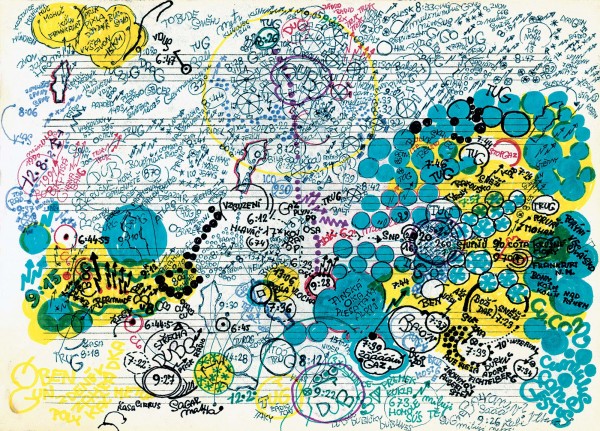 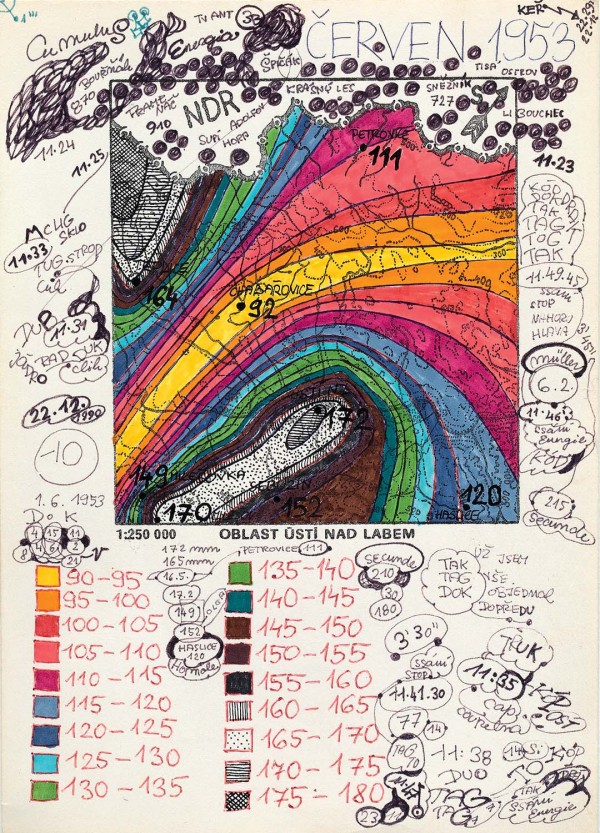 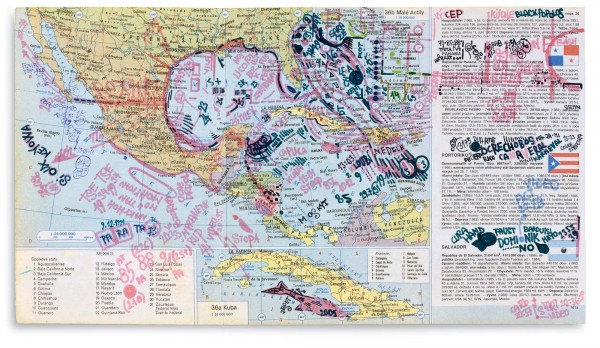 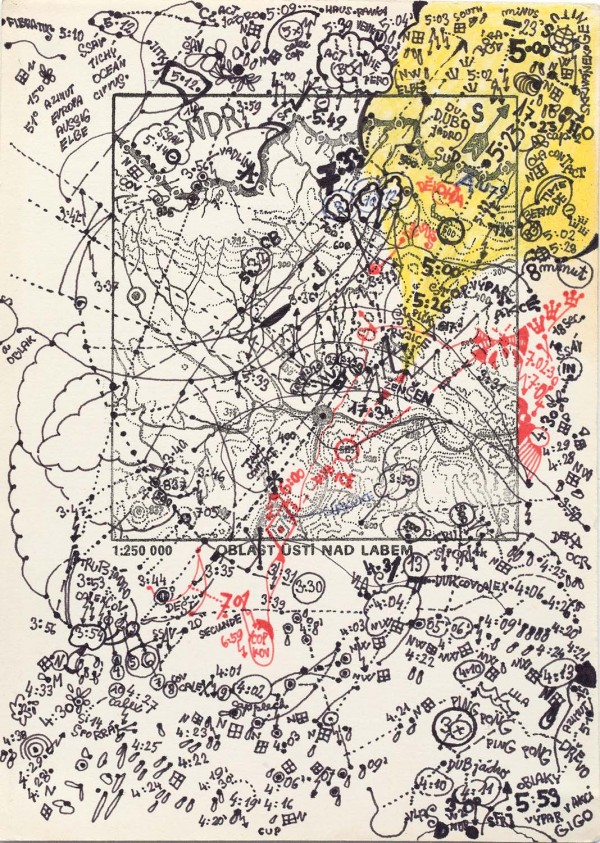 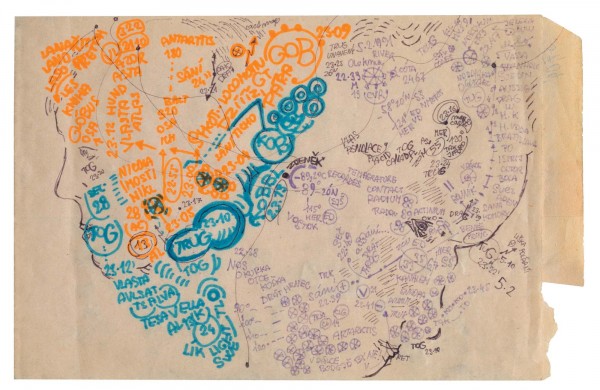 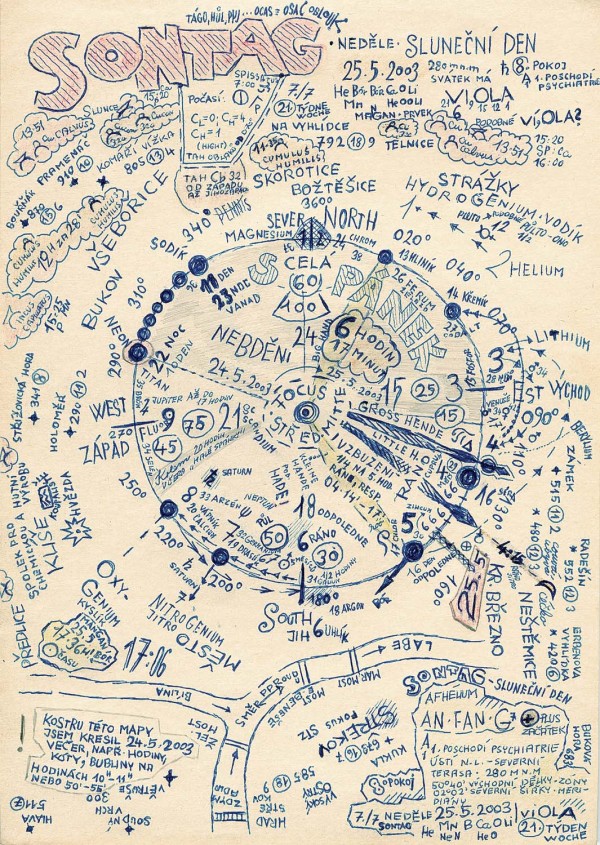 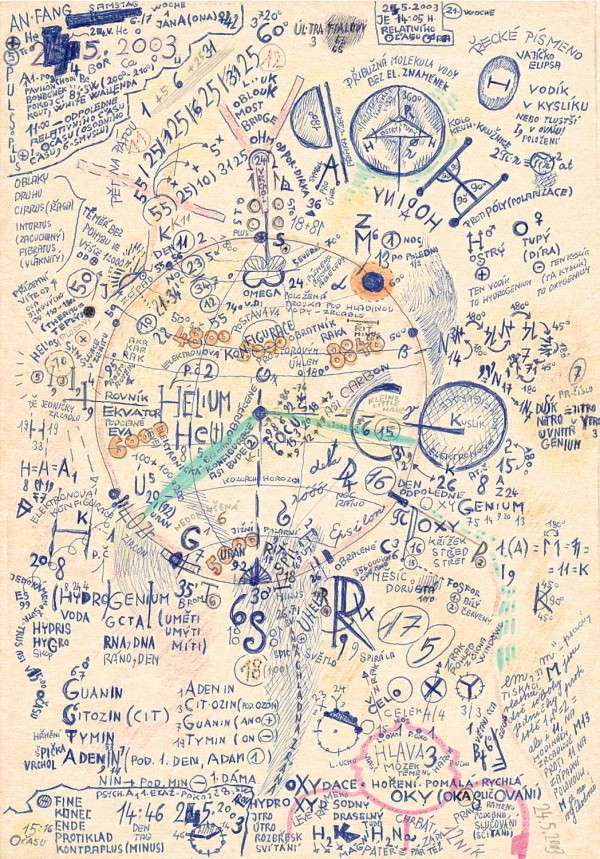 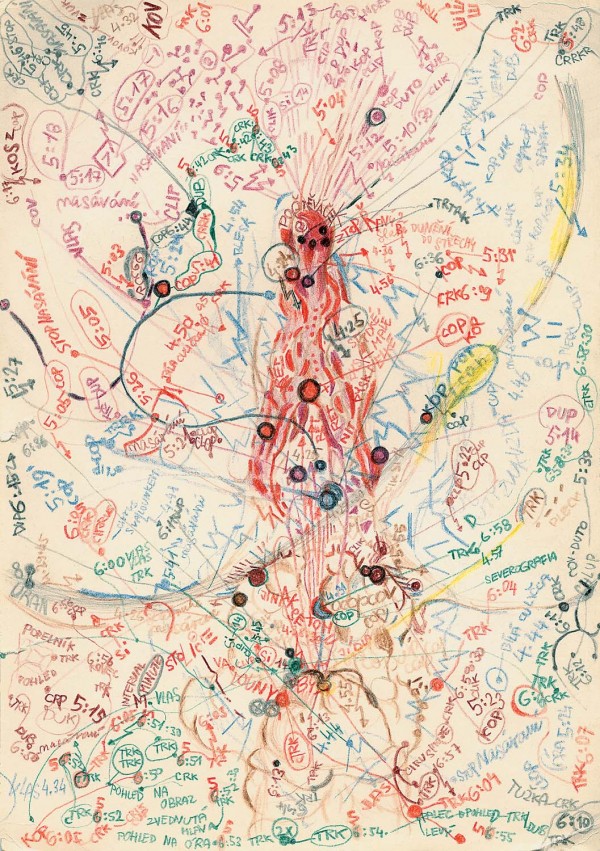 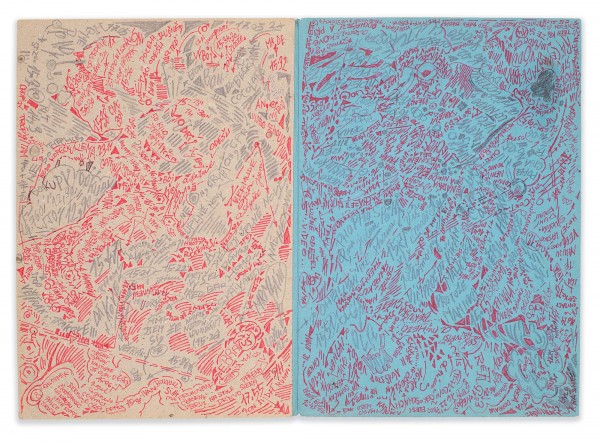 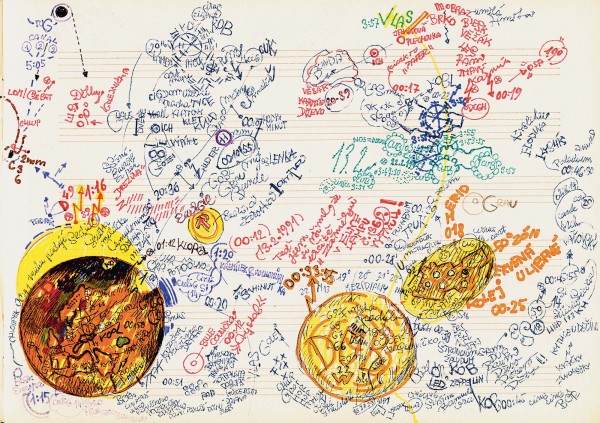 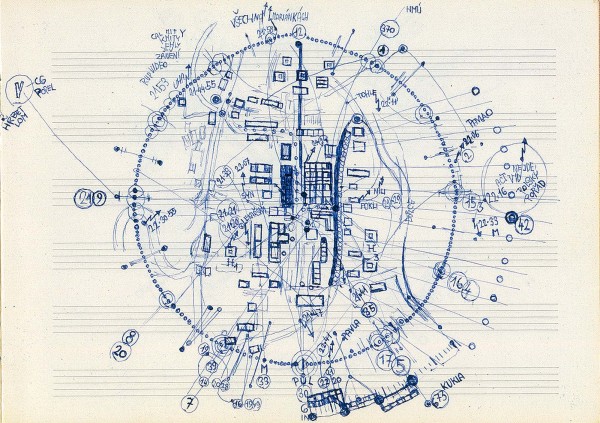 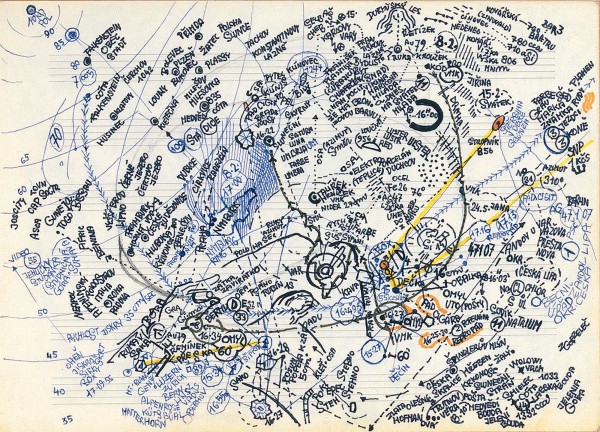 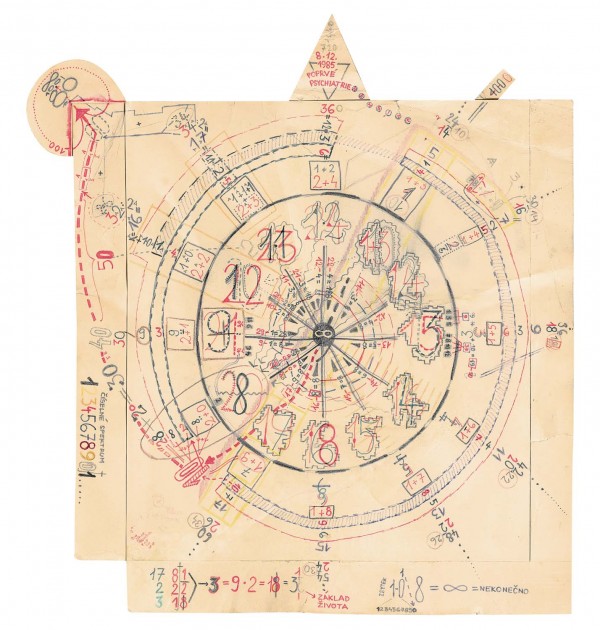 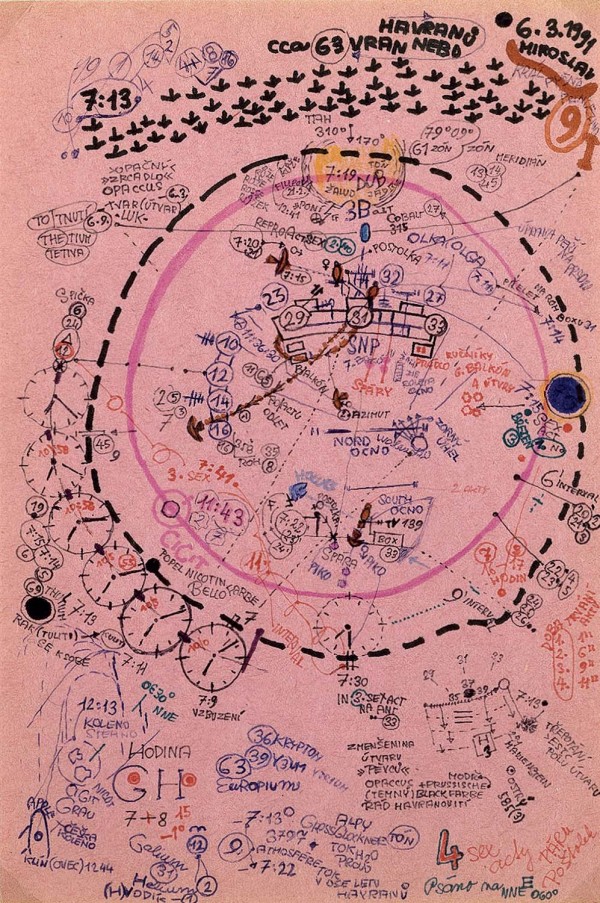 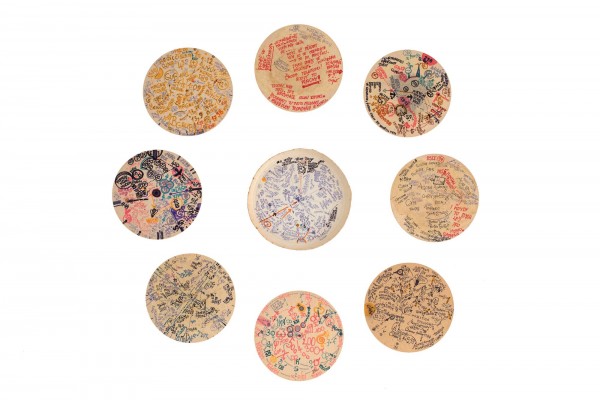 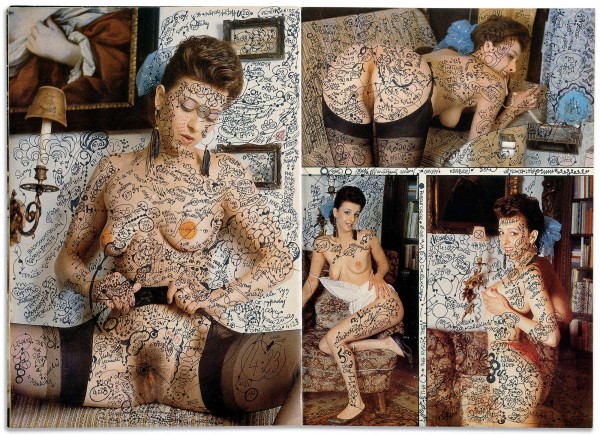 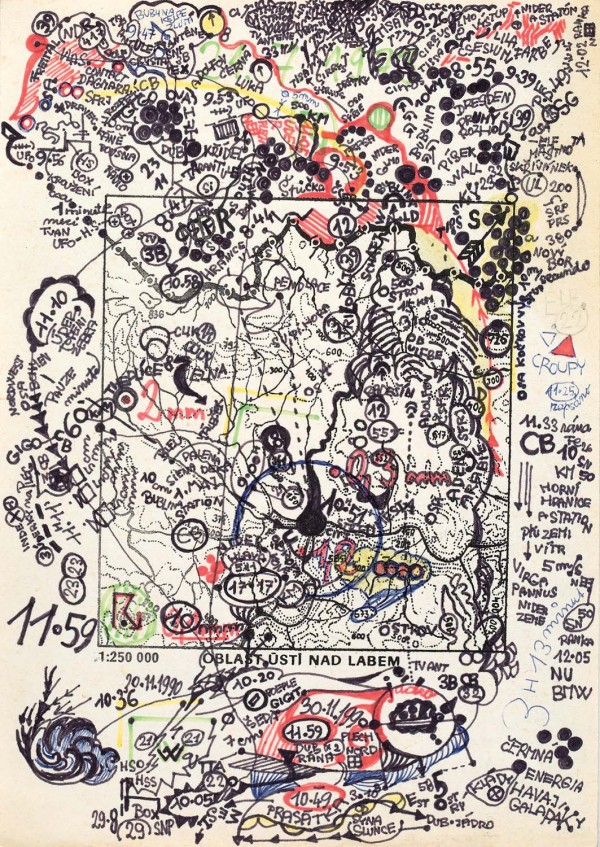 In the 1980s, Zdenek Kosek suffered severe psychological trauma that led him to believe that he was playing a decisive role in the great order of the universe. Perceiving himself as a sort of switchboard that constantly received and transmitted multitudes of information, he felt that he had to control meteorological problems by making note of everything that took place around him. He was
also convinced that his gestures—including the lines that his pencil made on paper—could generate
rain or drought around the planet. Therefore, he spent his days at his window recording all sorts of
data in school notebooks, on atlas maps, or in old magazines. He brought together sounds, letters,
numbers, portrayals of sex and time, natural phenomena, and everyday mishaps because all of it made sense to him. Amalgams of non-hierarchical signs and reflections of a quasi-scientific aesthetic, Košek’s works responded to a dictated ritual to which he had to submit or risk being responsible for irreversible chaos. In Košek’s mind, what happened in the clouds arose from the sex act. He observed that in the Czech language, when there was a storm, it was said “the devils got married.” In addition, he thought that the mystery of life on Earth resided in the circulation of water between land and sky, or, more broadly, in vertical exchanges (he was, for example, inter- ested in the fact that the dead evaporated, or became mixed with the sky, once their bodies had been cremated). Unique among his work, an erotic series shows photographs of women, clipped from pornographic magazines, that he “tattooed” with magical formulas. In the images, he noted hour by hour, minute by minute (more precisely, between 3:00 and 6:30 a.m.), what he heard and felt: the woman’s body became a composite, heterogeneous image. By superimposing a lace- work of annotations, Košek generated a fertile rain, thus producing orgasm.