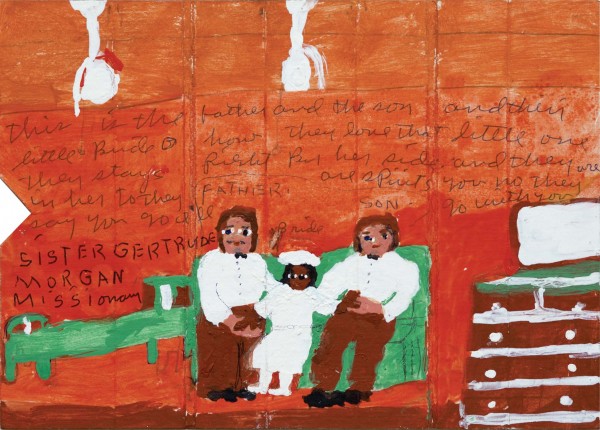 Seventh child of a poor family, Gertrude Morgan grew up on the family farm and left school after three years to help her parents. Her family moved to Columbus, Georgia, when she was eighteen. She became an active member of the local church and married in 1928; however, she did not have any children. In 1934 she experienced the first divine revelation, which made her leave her home and husband to start a new life of evangelization and healingn until the third revelation in 1939 ordering her to ” find a new way to share the gospel”. Adept of Afro-American spirituality which seeks communion with the Lord through the practice of music, song and dance, she moved to New Orleans where she established a mission and an orphanage. A new revelation in 1956 ordered her to paint in order to spread the word of God, while the following year, another revelation fundamentally changed her relationship with God: she was chosen to be the bride of Christ. She started to dress only in white, left the orphanage and moved into a new house called The Mission of the Everlasting Gospel. She added artistic creation to her daily activities (Bible reading, prayer, preaching). While in the beginning she only represented passages and stories from the Bible, she  gradually moved to a more creative and personal art. Her vision of “The New Jerusalem” — “I saw the holy city, the new Jerusalem, coming down out of heaven from God, prepared as a bride adorned for her husband. “(Apocalypse 21:2) — is central.