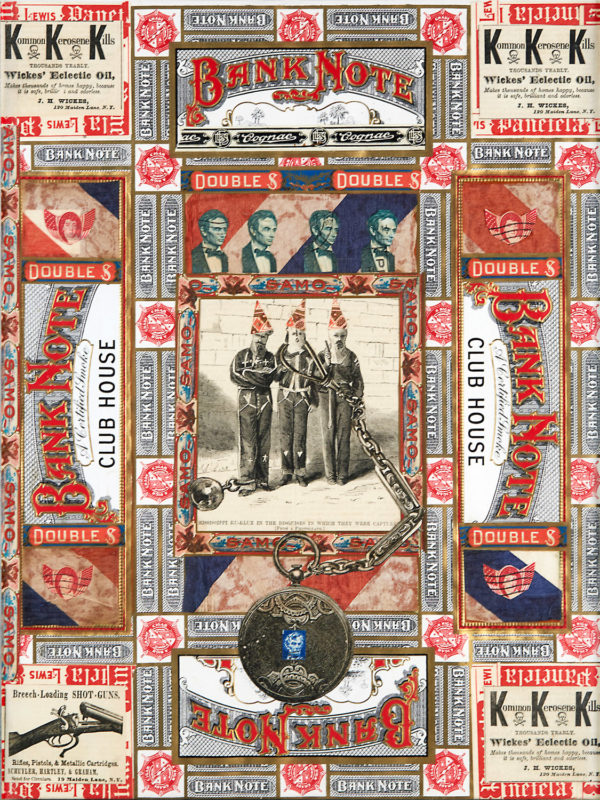 Born on the outskirts of Havana, Felipe Jesus Consalvos grew up on his family’s farm. After he married, he immigrated to the United States. Around 1920, he settled in Miami, and then moved to Brooklyn and finally to Philadelphia. For much of his life, he worked as a roller in a cigar factory. His artwork, which was stored away in a Philadelphia garage, was discovered in 1983, when the building was sold. The collection comprises more  than eight hundred collages on paper, various objects, musical instruments, and more. In his collages, Consalvos made abundant use of press clippings and cigar-box images.
The images covered many eras (from the late eighteenth century to the 1950s) and subjects, including Adolf Hitler, Native Americans, anatomical illustrations, and pin-up girls. Consalvos’ works often relate politically subversive stories about the founding fathers of the United States, provocatively addressed imperialism, race, and sexuality—mixing a surrealist, burlesque aesthetic with the revolutionary political discourse of Cuban cigar makers. In one of the works, he diverts the abbreviation “KKK” (“Kommon Kerosene Kills”) in an advertisement for a lamp oil that was safer than other combustible products to allude, as the advertisement already did, to the Ku Klux Klan. One of the three Klansmen is attached by the neck to the chain of a medallion on which Consalvos has glued a portrait of Abraham Lincoln, also visible in other places on the same work. In another collage, it seems that Consalvos is using images of Presidents Lincoln and George Washington to ironically challenge the significance of civil rights in the United States. The collage itself is “candy money,” currency that supposedly can be used to buy not only consumer products such as alcohol and tobacco but also the freedom of homosexual love.