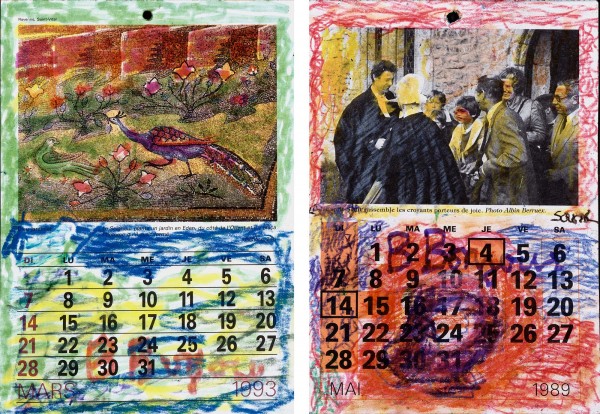 Originally from the Rhone Valley, Benjamin Bonjour moved after the death of his mother. At the age of eighteen, he suffered from severe meningitis, from the consequences of which he would suffer his whole life. First he was supported by his brother, who subsequently died in an accident; he then offered his services to sing to the sick, and became a peddler, selling to farmers everyday objects: yarn, needles, wool, aprons, etc. with the assistance of his two sisters. Supported by the two sisters, around the age of sixty years old he devoted himself entirely to drawing and singing. Benjamin Bonjour worked on recovered materials (flyers, envelopes, chocolate box paper, computer paper) with crayons or colored pens, creating series of simple themes: flowers, trees, landscapes, mountains, churches.  He represents his travels from village to village. The repetition of the pattern, the fragmentation of colored surfaces in small units, and the tremor of the line give the paper a vibration which actives the whole sheet.